Maps were disabled by the visitor on this site.

The term «bum’s rush» dates back to the 1940s, and it literally means to forcibly eject a person – usually from a night club. In context, it often referred to a person of somewhat dubious character, as in «He’s nothing but a bum’s rush.» University of Texas composer Donald Grantham selected the intriguing title for this piece to match the music, which creates a dark, menacing and morally ambivalent atmosphere, the kind likely to attract a bum’s rush.

–Program notes by the United States Navy Band
Bum’s Rush opens with a mysterious tone, featuring an alto saxophone solo with the low reeds giving us a jazzy underbelly to allow us to “feel the swing” of patrons walking into a tavern, followed by a more relaxed portion where the patrons are peaceably enjoying their libation of choice. As in all places where alcohol and loose law enforcement were present, the music depicts the growing crowd and bustle of the establishment. We can hear the piano of the tavern player as well as the some of the raucous behavior of the patrons displayed by the trumpets. We clearly hear the bartender seeking out, discovering and then tussling with the offender as we reach the conclusion, with the bum hitting the street with the effect of the last note accentuated by a big bass drum hit. 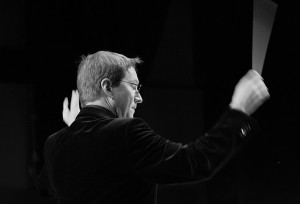 Vi deltar i elitedivisjonen lørdag i Store Sal i Olavshallen.